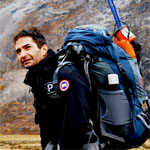 Ray has won numerous international ultra marathons of distances from 100 to over 200 miles in length in some of the harshest conditions on the globe. He and two other runners recently ran the entire width of the Sahara Desertâ4500 miles in 111 days with no rest daysâand in the process learned of the seriousness of the water crisis in Africa. The run was documented in a film directed by Oscar winner James Moll and narrated by Matt Damon. One of the goals of the film is to raise awareness for the water crisis in Africa. Ray now uses his athletic career to support philanthropic causes and inspire youth. Ray is a board member for the ONEXONE organization and the Ryan's Well Foundation. Ray is the founder of i2P. Along with Richard Weber and Kevin Vallely, Ray trekked unsupported to the South Pole in a world record time of 33 days, 23 hours and 55 mintues, and in the process the team shared their expedition with, and were inspired by, thousands of students. Most recently Ray accompanied the five Youth Ambassadors as they made their trek across Baffin Island for stage 1 of the World Expedition. 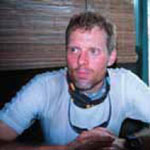 Mark Dohn is a husband, father of three, educator, and athlete who brings a wonder and passion for the use of technology in experiential education to the team. A competitive cyclist who raced at the highest levels in both North America and Europe, Mark then turned his focus to education. Adding a teaching credential to his Bachelorâs of Arts in Anthropology from Miami of Ohio, he has spent the past twelve years advocating for the use and integration of technology in education, and the development of the 21st century classroom. In 2009 Mark was recognized as an Apple Distinguished Educator.

Thomsen is a 20-year old MÃ©tis hailing from Yellowknife, NT who pursues his Olympic dreams full-time as a professional cross country skier based out of Whistler, BC. Since the age of 17 he has been co-owner of Mountain Bike Madness, a summer day camp based out of Yellowknife. The camp focuses on getting kids ages 9-13 outdoors, having a great time, and living healthy lifestyles. Although school work is currently taking a backseat in his life, Thomsen continues to dabble in part-time correspondence studies, with a general interest in the Sciences. Although he specializes in races less than 3 minutes in length, Thomsen got his first taste of Ultra racing in March 2009 by winning the diamond in the 3-day, 135km Rock and Ice Ultra K-Rock ski race and plans to compete in similar events in the future. With a keen interest in the environment and a strong connection to the North, Thomsen was extremely excited to share the experience of hiking the Akshayuk Pass this fall.

Bob Cox has been in athletics all of his life (a lifelong surfer with nearly 10 years in the surf industry) and has recently found his stride in endurance endeavors such as the Canada OnexOne, the Oceanside 70.3 Triathlon, multiple 50kâs, and the San Francisco 24hour footrace race with a top ten finish. He spent much of his youth surfing in the Pacific Ocean and from those experiences his passion for our big blue planet was formed. Bob earned a Bachelor of Arts Degree in Political Science with an emphasis on Public Policy from California State University, Northridge. His appreciation for clean drinking water grew from his profession as a potable and recycled water Cross Connection Specialist in California. In October 2007, Bob met Ray at a Livestrong event in Texas and from that moment he knew his life had changed. From that day forward the two men have dedicated their lives to the message and ideals of i2P.

Kathy combines her career as an environmental advisor and a fondness for ultra distance running to constantly learn and push herself past her perceived limits, and is passionate in her goals of helping to find solutions for many of the social issues affecting young people at home and abroad. Through ultra running she discovered an inner drive to set far-reach- ing goals and a dedication to pursue them to completion. During Rayâs crossing of the Sahara she ran 160 kilometers with the team in some of the harshest conditions of the expedition. Kathy volunteers her time as a board member of the Ryanâs Well Foundation and she hopes to pass on a legacy of learning and giving to her daughter Mia Sahara.

What will the i2P Youth Ambassadors use for each stage of the Running Tunisia Expedition? Click the image above to find out.

The 4 i2P Youth Ambassadors will be journalling their daily experiences with flip cameras. Daily mileage will depend on terrain and heat, but the runners will most likely cover between 25 to 50 kms per day.