Our impossible2Possible team reflects on their latest expedition to one of the worldâs most historical destinations: Greece.

Never in a million years could I have foreseen the impact an i2P expedition would have on my personality and perspective on life. On the website, an i2P expedition appears to be an expedition that focuses on two main things: 1. Empowering youth through inspiration and education and 2. Teaching youth ambassadorâs resiliency through providing the environment for them to push their limits. It does not however include just how life changing the expedition can be on each of the individuals involved with it.

Flashing back to the first running day of the expedition, I remember the day beginning well. The team was cooperating together as if we had known each other for years, the terrain was not too difficult, and the day was absolutely beautiful. However, as the kilometers and altitude continued to add up, I began to feel my body weaken. Every step felt weighed down and an overwhelming feeling of light-headedness came about. My low iron was beginning to take its tollâ¦ again.

Hoping that the next day would be better, I set out to try running again on the second expedition day. However, five kilometers into the run I fainted for my first time. As I opened my eyes, all I saw around me were the group of youth ambassadors, our support runners and the support vehicle. Without surprise, I was not allowed to run the rest of the day.

A life-changing realization occurred when my fellow youth ambassadors crossed the finish line on the second day and as I watched them cross the line, I found myself crying rather than cheering. Sadly, I was not crying out of happiness for the other youth ambassadors, but out of frustration and sadness that I was not there to cross the line with them. As I took a moment to sit by myself, I wondered, âWhy am I crying when four people who I care about so much just completed such an extraordinary feat?â

Upon reflecting on this moment I came to the realization that the reason that I felt this overwhelming sense of sadness and frustration was because I felt as though I was a âfailureâ. Prior to this expedition, I defined failure as the inability to complete a task that an individual had originally set out to do. It was not until I truly began to question this definition that I came to the realization that perhaps not being able to complete something was not necessarily the equivalent to failing.

The following morning i2P co-founders Ray Zahab and Bob Cox took me aside when the others were packing up their tents to remind me to stay positive and that the expedition was so much more than just running. i2P, at its core, focused more on educating the youth on the Heroâs Journey and inspiring them to apply this story to their lives.

Hearing Ray and Bobâs words finally resulted in me re-defining what it means to be a failure. I learned that failure is not necessarily not being able to finish something, but failing to learn from oneâs experiences. Had I passed out the second day and continued to stay pessimistic, disappointed, and self-orientated, that is what I would consider failing. The ability for me to gain a new perspective on life, be happy for my fellow youth ambassadors, and embrace Greece, despite my personal obstacles, was one of the greatest successes of my life.

The Road Back & The Resurrection

When the hero completes the quest, it is important to reflect. The Youth Ambassadors apply this to their marathon journey.

» Read more in the Education Section

What is the reward of the quest? What do you gain from experiences? The Youth Ambassadors give insight to what they think they will gain from their i2P experience.

» Read more in the Education Section

The team talks about why they are resilient. We pose the question to you: How are you resilient in your day-to-day livelihood?

The team sums up the importance of financial literacy! Will you put what you have learned in to practice? Every i2P Youth Expedition is made up of a dedicated team of volunteers- here is our team including the Education, Film, Logistics team, and of course the Youth Ambassadors! SO much happens behind the scenes! Thank you!!!

From Greek Mythology, to the movie 'Frozen', to Youth Expedition Greece - every Hero's Journey must face an ordeal. The Youth Ambassadors discuss how they overcame adversity and challenges.

Climbing a mountain is hard enough, so taking the wrong trail is an added challenge! Resiliency and companionship is important when adversity strikes. 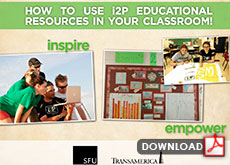 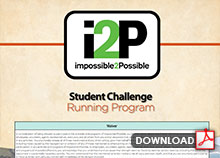