This second stage of the i2P World Expedition Series will be modeled on the same platform as the highly celebrated 2009 Baffin Island Youth Expedition, but in a dramatically contrasting locale - the northern Sahara Desert in Tunisia. On the heels of the Siberian Express for Water Expedition, in April 2010, five Youth Ambassadors have been selected to join Ray Zahab, along with fellow i2P ambassadors and adventurers, in this homage to ‘Running the Sahara’. Youth ambassadors will run for 10 days - and a total of 200 kms - through searing heat and massive sand dunes in a quest to cross the country, while pushing their own physical and mental limitations.

Located in the mysterious and legendary region of North Africa, Tunisia is rich not only in culture and history, but also has remote expanses of Saharan sands within its borders. This will be a unique experience for students across North America to engage in, and learn about, one of the planet’s most critical social and environmental issues - access to safe, clean, drinking water. The Baffin Island Youth Expedition had young adventurers trekking among glaciers containing millions of liters of water, while Running Tunisia will take them to a region known for annual droughts and a lack of clean drinking water. For some, especially the nomadic peoples of the Sahara, the daily struggle for water can mean the difference between life and death.

As part of the impossible2Possible Twenty10 H2O Initiative, the expedition will be preceded by an engaging challenge for schools in Canada and the U.S.A to raise awareness and funding for water-specific projects in Africa. Funds raised by the campaign will go directly to GivingWater.org in the USA, and Ryan’s Well Foundation in Canada. Both organizations are well respected and leaders in the fight for clean water in developing countries around the globe. The i2P Extraordinary Acts program will see schools from Canada and the United States help fund the construction of two clean drinking water projects! This initiative will be a critical part of the Running Tunisia website, which will feature a social networking platform where students will be able to check progress, communicate with fellow students, blog, see the people & communities they are helping, and much more!

The i2P education resource program - which has been touted by Apple Distinguished Educators as truly, "21st century learning," and "ground breaking" - will be taken a step further with the introduction of live, streaming video. Once again, Youth Ambassadors will communicate directly with their peers, and will facilitate interaction between students in North America and Desert nomads! i2P’s Education Coordinator, Dr. Ewan Affleck will team up with educators, scientists, and advisors to create captivating educational modules that will bring everyone alongside the expedition team as they cross some of the harshest terrain on Earth. 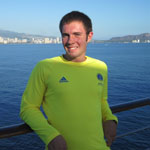 Andy is a currently a junior at the University of Pittsburgh. He has always been an adventurer and an endurance athlete with a love of the outdoors. In 2008, he ran the Rock 'n' Roll Marathon in San Diego in 3:10, then he and his dad drove up to San Francisco where they began their 3800 mile, self-supported, transcontinental bicycle trek. After 7 incredible weeks they reached the Atlantic Ocean in Yorktown, Virginia. In 2009, Andy finished the grueling course of the Boston Marathon in 3:10, requalifying for the race. He recently went on Semester at Sea, on which he sailed around the world while visiting 10 countries in the best semester he's ever had! On this journey he saw firsthand the huge importance of access to clean drinking water, especially in countries such as Morocco, Ghana, and India. The time abroad also further whetted his appetite for travel, which will lead him to graduate early and spend the beginning of 2011 exploring the world for as long as possible. Andy is an extremely hard worker in everything he sets his mind to, and he is planning to attend one of the best medical schools in the world in 2011. 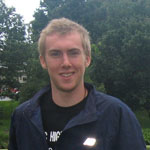 Connor is a Grade 12 student at Kelowna Secondary School in Kelowna, BC, Canada. As a member of the KSS Interact Club for 3 years, Connor has become very involved with volunteer work locally and globally. This past fall, he put on an event at his school called KSS in the Congo, a weeklong event to raise money to build a school in a war torn area of the Democratic Republic of the Congo. Through incredibly generous support, over $10,000 was raised to build a school in the small village in the mountains of High Plateau, DRC. Connor has been a competitive runner for 6 years and will be pursuing running at the collegiate level next year and hopes to one day represent Canada at the Olympics or World Championships. This past fall, he won gold at the BC High School Cross Country Provincials and competed at the Canadian Junior Cross Country Championships in Guelph, Ontario. He will be pursuing Animal Biology at the University of Guelph next year and hopes to one day become a Veterinarian and possibly travel overseas and work with Veterinarians without Borders. He has been raised in an incredible family and has lived in Kelowna his whole life. He is an outdoor enthusiast who loves snowboarding, waterskiing, hiking, camping, swimming and biking. He feels that this expedition is a stepping stone to his life of adventure, humanitarianism and pushing himself to his physical and mental limits. 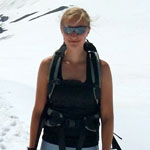 Kajsa is an active high school student and athlete from Vancouver, British Columbia. She has been involved in sports since a very young age; she competed in team sports as well as running, swimming, and triathlons, but now solely focuses on cross-country skiing in hopes of one day making the Olympic team. Kajsa volunteers with her club and also helps coach a physical education class at her school; she hopes to encourage young athletes in any way she can and inspire youth to dream big and challenge themselves in all aspects of life. Although still in high school, Kajsa focuses on literature and social sciences with a keen interest in history, human geography, and how humans interact with the earth as well as each other. She feels that social issues in the world are equally as important as environmental ones. Upon graduation, Kajsa aspires to become a writer/journalist and continue to be involved in sport for as long as her body will let her. This expedition brings together all the things she loves: adventure, exercise, and travel. Kajsa is ecstatic about being chosen as one of the five youth ambassadors and cannot wait to share her experiences in Tunisia with everyone following the expedition.