In May 2011 impossible2Possible will be visiting the mountain nation of Bolivia, to run across the world's largest salt flats and celebrate the International Year of Chemistry. Bolivia is a landlocked country that sits ten degrees below the Equator in the center of South America. A nation of contrasts, Bolivia is one of the economically poorest countries in latin America, but boasts a rich diversity of cultures, languages, flora and fauna. While to the North-East, Bolivia features a lush tropical basin that feeds the headwaters of the Amazon River, South-Western Bolivia is very dry and situated on a high plateau that straddles the Andes mountains. Nestled high on this plateau among volcanoes and lakes is the Salar de Uyuni, the largest salt flats in the world. The Salar de Uyuni is home to ten billion tons of salt, and more than half of the world's lithium reserves. With one meter of elevation change across the 10,000 square kilometer flat, the Salar is used by NASA to calibrate satellites, including those that detect changes in polar ice sheets. Four Youth Ambassadors will be selected to join Ray Zahab, and fellow i2P adventurers in a 250 km running expedition across the salt flats. Youth Ambassadors will run an average of a marathon per day for one week in a quest to experience this incredible country as few have ever done before.

In honor of the International Year of Chemistry i2P will take the principles of chemistry out of the classroom and into the laboratory of the natural world. Chemistry is the science of matter, and how matter changes in different environments and conditions. Bolivia's Salar de Uyuni is an ideal location to explore the world of chemistry. The Salar is a lake which is covered with a crust of salt up to 10 meters thick, strong enough to support vehicular travel. Below the crust lies a lake composed of water, salt, magnesium and over half the world's lithium reserves. Adjacent to the Salar are a series of lakes filled with magnesium, sulfur, manganese, boron, copper and arsenic. At almost 12,000 feet above sea level, the change in atmospheric pressure impacts how matter and chemical reactions behave in this environment, making this a unique opportunity for education.

In partnership with Simon Fraser University and the International Year of Chemistry, i2P will conduct a series of experiments in this remarkable environment that will bring the principles of chemistry alive. These experiments, under the supervision of a chemistry professor that is joining the expedition team, will be broadcast live to participating schools and posted on the i2P website.

The 2011 Bolivian Expedition will demonstrate once again why the i2P Education Resource Program has been touted by Apple Distinguished Educators as truly "21st Century learning," and "ground breaking". The i2P web-team will be utilizing streaming video during the expedition to allow students to communicate directly with the adventurers as they traverse this unique landscape. i2P's Educational Coordinator, Dr. Ewan Affleck, will again team up with educators, scientists, and advisers to create a captivating curriculum of educational resource modules, and interactive tools which have proven extremely successful for teachers and students alike. Among the educators joining the i2P team in Bolivia will be Dr. George Agnes, chemist and Dean of Graduate Studies at Simon Fraser University, and Dr. Greg Wells, a physiologist at the Hospital for Sick Children in Toronto, and expert in exercise physiology. The Youth Ambassadors themselves will become a chemistry experiment as their electrolyte levels and other performance metrics are monitored daily.

The World Expedition Series is designed to transport students to remote and contrasting locales around the world. To date, the Series has seen young adventurers trek among glaciers containing millions of liters of water in the Canadian Arctic, across the desolate sands of the Sahara, and through the dense and lush jungle of the Amazon. As with all i2P Youth Ambassador expeditions, the team will push themselves beyond any perceived physical and mental boundaries they have ever placed upon themselves to discover that they are truly capable of achieving the impossible. 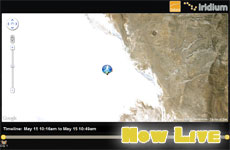 At the most basic level table salt is a compound... more

Salt is such a critical component in the lives of humans... more

When most people hear "salt" they immediately think... more

Salt as we have already seen has been critical... more