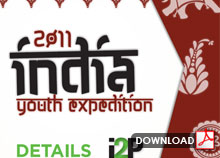 This coming November, the impossible2Possible (i2P) Youth Ambassador team will travel to Rajasthan, the largest state of the Republic of India. The 5th stage of the i2P World Expedition Series (W.E.S.) will venture through the region of the Thar Desert - also known as the "Great Indian Desert". It is the world's seventh largest and one of the most inhospitable deserts on the planet. The Thar Desert is known for three distinct regions, the Thar - with Sand dunes eclipsing 150 meters, the plains, and the Aravalli range - with peaks topping 1700 meters. Four Youth Ambassadors will join Ray Zahab, and fellow i2P adventurers, teachers and doctors on a 7-day running expedition covering up to 290 kilometers through the vast & expansive Thar Desert, near the northwestern edge of India. Youth Ambassadors will run an average of a marathon per day for one week in a quest to experience this incredible country and communicate their adventure with youth all over the world. This diverse and contrasting landscape will ensure that this i2P Youth Expedition will be the toughest to date, and will require incredible preparation to guarantee a successful expedition.

As globalization and international collaboration increase, there are greater difficulties in cross-cultural communication. Challenges consist of understanding local issues from various perspectives or working with people who have different communication styles. Intercultural communication can help you approach the world with various regional perspectives and give you the tools to build bridges across cultures. As part of their preparation for Expedition India, the i2P Youth Ambassadors have undergone cultural sensitivity training to help them gain a better understanding of the social and environmental issues surrounding India. These newly developed intercultural skills will enhance their ability to work in teams, become community leaders, and empower others to take action.

During their running expedition, team i2P will investigate the important issue of World Health. According to the United Nations health care is a human right, yet millions around the world have no access to health service. Sustainability of health services is an issue that affects all citizens of the world, and still economies around the world are struggling to maintain these important services. India is home to one of the world's fastest growing economies and over a billion people - factors that greatly constrain its ability to offset deep contrasts in living standards. India also boasts some of the most advanced health facilities in the world. The Times of India estimated that nearly one million Indians die every year due to inadequate access to healthcare services. The massive population and great disparity in wealth accentuate most of the issues that threaten access to world health today. In honor of the International Decade of Biodiversity, i2P will also investigate the connection between World Health and Biodiversity

The 2011 India Expedition will demonstrate once again why the i2P Education Resource program has been touted by Apple Distinguished Educators as truly, "21st Century learning," and "ground breaking". The i2P web-team will be utilizing streaming video during the expedition to allow students direct communication with the Youth Ambassador team as they traverse this varied and diverse eco-region. i2P's Educational Coordinator, Dr. Ewan Affleck, will again team up with educators, scientists, and advisers to create a captivating curriculum centered on "World Health." The program will include a complete look at the sustainability of health care around the world, with a focus on the differences in health service in India, the United States and Canada. The Experiential Learning Program has proven extremely successful for teachers and students alike. The four i2P Youth Ambassadors will be the direct conduits of information back to thousands of students following intently from around the world. The four Youth Ambassadors will once again be the lead researchers for an Experiential Learning Program like no other on the planet. As with all i2P Experiential Learning Programs, Expedition India will partner with some of the best organizations and experts with knowledge about the World Health theme of the expedition. In the case of Expedition India, i2P will partner with hospitals, health agencies, and individual experts in the field of health and wellness.

The World Expedition Series is designed to transport students to remote and contrasting locales around the world. To date, the Series has seen young adventurers trek among glaciers containing millions of liters of water in the Canadian Arctic, across the desolate sands of the Sahara, through the dense and lush jungle of the Amazon, and traversing portions of the Bolivian salt flats into the mountainous Altiplano. As with all i2P Youth Ambassador Expeditions, the team will push themselves beyond any perceived physical and mental boundaries they have ever placed upon themselves to discover that they are truly capable of achieving the impossible.