The theme of expedition Utah is 'Running Through Time', which reflects the expedition topics of Geology and palaeontology. During this expedition Youth Ambassadors will 'run' through 255 million years of the Earth's history, written in the geological record of one of the great natural treasures of the world, Grand Staircase Escalante National Monument in southern Utah. The education focus of the expedition is to use the disciplines of geology and palaeontology to contemplate the history of life on Earth, which spans 3.6 billion years. Modern humans are a footnote in this history, appearing a mere 200 thousand years ago. Yet in that short time, human activity has had a profound impact on global ecosystems. Youth Ambassadors will be asked the question:

"does the geological record of life on Earth offer lessons for modern man"?

Their task is to establish whether the answer to this question can be found in the folds of the Earth over which they will literally be running.

How the Education Program Works

Each day the Youth Ambassadors have set physical and intellectual challenges. These challenges are framed around a specific expedition curriculum that is unrolled on a daily basis that sees the Youth Ambassadors visit a specific time in Geological history. The Youth Ambassadors will to trace the history of life on Earth from 254.5 million years ago back to the present time. With the guidance of expert faculty they will find evidence in the landscape of the Grand Staircase Escalante National Monument of the changes occurring through time that impacted life on Earth.

Each day the Youth Ambassadors will:

The surface of the Earth is constantly being reformed and modified by three principle processes:

Students and classrooms following online can find supplemental learning material on each Day Page including:

The Earth's Crust is a Time Machine

Sedimentation is the process by which layers of earth are laid down, grain by grain layer upon layer, the oldest at the bottom the youngest at the top. Gradually the layers turn to stratified rock. As you drill through the layers of rock from top to bottom you find a fossil record of the history of life on Earth. This sedimentary record, written in geological time is, a virtual time machine of the history of the Earth.

It is this time machine that the Youth Ambassadors will be using to travel through 250 million years of time written in the rock of the Grand Staircase Escalante National Monument. An Overview of the Geology of the Grand Staircase Escalante National Monument
Dr. Gerald Bryant

Abundant remains of ancient life forms preserved in the rocky landscape of Grand Staircase/Escalante National Monument (GSENM)! Among the great treasures held in the rock are unusually high-concentrations of dinosaur fossils. Let us consider how unlikely that is. How much of my own life record will exist in a mere thousand years? Not my body, unless my children take truly extraordinary measures - and I am not encouraging that. No footprints: where have I stepped that others have not trampled since â or will not have been wiped clean by wind or water, many times over? How long before my parentsâ concrete driveway is broken up and carried away, destroying my most durable handprints? Forget about fading photos and crumbling journals. Not even my electronic records are permanent, nor are the computers necessary to access them. Letâs suppose that somehow I do get fossilized, buried beneath tons of sediment like some Mesozoic dinosaur. What are the chances that my remains will ever be examined by future bone hunters? Having escaped disintegration by surface processes, they must then endure slower transformations from chemicals in the groundwater and the gradual increases of pressure and temperature that, unchecked, will replace, re-order, then destroy the very compounds composing fossil me. Through geologic time, the earth is not a stable resting place. Continents collide, mountains rise - only to be worn away by billions of raindrops, raging torrents, icy winds, and the shake, rattle, and roll of countless earthquakes. If my fossil remains survive their journey through the depths and re-emerge in a sandy wash, how long before they are broken up and washed away, like the dirt that surrounds them? Why, then, are we finding so many well-preserved fossils in the GSENM?

Standing on the Kaibab Plateau, with your back to the Grand Staircase, looking down into the Grand Canyon, it may be tempting to think that a complete record of Earth history is contained in the mile-thick succession of sedimentary layers appearing there: slowly, grain by grain, one layer after another laid down in turn, oldest at the bottom, youngest at the top. What actually happened was not nearly so steady as that. There are big gaps in the record. Some, such as the so-called âGreat Unconformityâ, are obvious. Just above crystalline rocks that make up the core of the continent appear steeply tilted, crystallized, sedimentary layers. These represent the oldest sedimentary accumulation exposed in the region, laid down long before reptiles had their first opportunity to be fossilized. After deposition, they were deeply buried, then tilted into mountain ranges by stresses generated in massive pieces of crust, miles thick, breaking apart at the Earthâs surface. The relatively flat surface at the top of those tilted layers marks the limit to which the mountain blocks were reduced, when the forces of uplift died out and surface erosion wore down the landscape. Planed-off mountains formed the surface on which sediment began to accumulate again, as sea level rose to flood the former highlands. At some places in the Grand Canyon, the Great Unconformity, by itself, covers more time than is represented in all the overlying succession â both gaps and deposits - put together!

Emerging from the Grand Canyon and starting up the Grand Staircase, the rock record looks more continuous. Nothing like the Great Unconformity is evident; however there are many hidden gaps here - gaps between the rock units and gaps within them. No depositional environment produces locally continuous accumulations. Through time, lakes fill up with sediment and even ocean basins experience major pulses of sediment transport, as well as reworking from changing currents, besides the long-term changes in the shape of ocean basins due to the movement of Earthâs crustal plates. However, the patchwork quality of sedimentary layers accumulated on continents is even more pronounced than in marine deposits â and thatâs where the dinosaurs (and many other Mesozoic reptiles) lived. This is both good news and bad news for paleontologists and other fossil hunters. The bad news is that only relatively small slices of time are represented in any continental succession - and the fossil record cannot be more complete than the sedimentary record. The good news is that in the slices of time that did produce a record, there is a tendency for extraordinary events to be best represented: itâs not the day-by-day processes of a river that end up being preserved, it is the big events, 100-year floods and the like. That is good news because it means that there were many times when tracks, plants, and bodies were rapidly buried and sealed away from the destructive forces at the surface of the earth.

So, letâs suppose that my remains are fortunate enough to get caught up in some natural disaster that transports them out of my usual realm and quickly buries them away from all those sniffing, biting, tearing, chewing scavengers â not to mention relentless microbes and caustic chemicals â in some quiet resting place that keeps my parts, more or less, all together. Maybe it is not so unlikely that my bones, at least, will manage not to rot away, completely, and furthermore, as time passes, their tissues could be replaced with more durable, mineral, compounds. Then we might dare to hope that all of this tedious work of preservation does not just get recycled into some igneous rock, deep in the crust, but that the forces that rearrange the continents manage to uplift my basin of deposition and turn it into a highland, like the Colorado Plateau â especially one like the CP, without all the tipping and turning, breaking and bending of uplifts like the Rocky Mountains. Then, with just the right amount of weathering and erosion to expose my fossil but not destroy it, enough water to rinse it off but not so much to make the grass grow over it, your descendants can find it and marvel at its symmetry! Of course, a nice dry climate, beautiful scenery, and good access roads, like we have in the GSENM, would help encourage those future fossil hunters to get out there and get the job done, too. As they poke about, what will they care if their fossil find is me or some neighbor of mine, equally surprised by changing circumstances?

Most of the fossils retrieved from the GSENM come from around the Kaiparowits Plateau, out of a succession of sedimentary rocks more than a mile thick. These layers were deposited 65-100 million years ago, in the later parts of the Cretaceous Period of geologic history. They represent an array of environments along the western shore of an inland arm of the ocean, at a time when sea level was much higher than at present. These include marine environments; though the sedimentary layers representing environments on the landward side of the seaway, such as stream deposits, have been particularly productive. Amazing fossil skeletons, including new species of both land and sea reptiles, have been recovered; but it doesnât take a complete skeleton to make a useful find. In fact, perhaps the most important material has been the great quantity of teeth and other small hard parts, including a wide assortment of bird bones, that has been carefully sifted out of rather ordinary-looking debris. Paleontologists canât tell a whole lot about the individual animals these parts came from; but they can track longer-term trends in the various families of creatures that are represented. This provides valuable information about environmental conditions and population changes during the period of time leading up to the collapse of reptile-dominated ecologies and the extinction of the dinosaurs. Additional insights are gained by comparing fossils from the Colorado Plateau with related forms recovered from more northerly regions that continue across the present-day border between the United States and Canada. Work is progressing, but it already appears that fossils collected out of the GSENM will give us the best record of land animals during this important time of any place in the world! 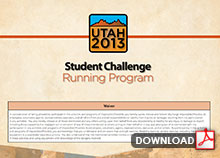